add a candle »
Jun 23, 2013 You are greatly loved by your family. We only spent a limited time with you (George) when you visited the Jones family but always were such a loving mom and grandmother. We will remember you as a classy lady with impeccable taste. Sending love and prayers to the family. The Zampella Family
Jun 15, 2013 Gay, you will be tremendously missed. You were a true Pioneer you mailed all the get well, sympathy and missing you cards and made the monthly phone calls. Now you are with George. Mary Jane Montemayor
add a note » 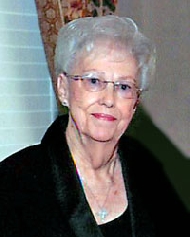 Inus Gaynelle Jones, age 88, passed away peacefully on June 5, 2013 in Texas City, Texas.  She lived with her youngest daughter and son-in-law, Joan and David House in Dickinson, Texas.

Her husband of 62 years, George Kenneth Jones and granddaughter, Samantha Jones, precede her in death.

Gay is survived and celebrated by her children, daughter, Cheryl Hernandez, son and daughter-in-law, Gary and Beverly Jones, and daughter and son-in-law, Joan and David House. She is also lovingly remembered by her 10 grandchildren and 7 great-grandchildren.

The family will receive friends on Saturday, June 15, 2013 from 11:00am – 12:00pm. The funeral service will immediately follow at 12:00pm. Both services will be held at Carnes Funeral Home, 3100 Gulf Freeway, Texas City, Texas. Entombment will follow at Galveston Memorial Park in Hitchcock, Texas.