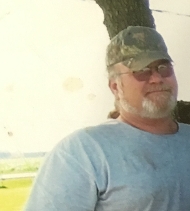 Frank was always known as Rusty. He was always a very hard worker and helpful to anyone who came in contact with him. He eventually worked with his dad in the landscaping business. They did the landscaping for Schlumberger and even the janitorial for a while. It was work, work, work for him. Many hours a week he would work for his father, even nights and weekends, but he didn't mind. He was always on call for his parents, being there whenever they needed him, no matter what time of day or night.

The last four years of his parents' lives, he took care of them, only taking one week off. His father had alzheimers and mother had congestive heart failure and after discussing with his mother, decided to care for them at their home. Even more memories were made in those four years, memories that were irreplaceable to he and his wife and daughter. I could go on and on as to the great man that he was, caring and providing for his wife and daughter. He was a great husband, father and friend and will be greatly missed by everyone.

May you watch over us from above and keep everyone safe. We love and miss you a bunch Rusty.

There will be a Memorial gathering at his home at a later date honoring both Rusty and his parents.

We love you,
Brenda, Stephanie and Michael