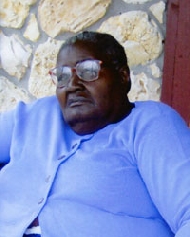 Ethel Verna Felder Hector was born January 31, 1930 in Somerville Texas to the late Ed Lee and Hattie Felder.
She attended Emmitt J Scott High School. She received Christ at an early age and was baptized.  She and Leroy Hector were married and raised their family.   She retired from UTMB as a housekeeper.