add a candle »
Jan 10, 2018 I miss you coming to visit me. I miss us drinking, laughing, crying together & then starting all over again. I miss you saying, \"Shh, don\'t tell Lucy\". You would always say, \"Mija, if God loves me, He will take me first.\" Well, I guess God loves you grandpa & so do I. You will always be my hero. KIMBERLY TEXAS
Jan 8, 2018 Dear Lucy, my sincere condolences and prayers to you and the Robles Family! May the Lord receive your beloved Ernest with open arms and embrace him into the heavens of eternal peace and rest! With all my love and hugs, your friend...Eva M. Blanchard Eva Mancillas Blanchard
add a note » 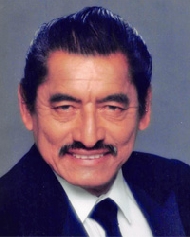 Ernest Robles was born in Victoria, Texas on August 11, 1937. He passed away Sunday, December 31, 2017. His parents were Valentine Robles and Guadalupe Cisneros Robles of Victoria, TX.

Ernest is survived by wife of 48 years, Lucille Robles, and sons, Ernest Robles Jr. and wife Rena of Texas City, Raul Perez, Johnny Perez of Houston, TX and daughters, Ruth Garza and husband Joseph of Austin, TX and Yolanda Lonsford and husband Dale of La Porte, Texas. He and Lucille are blessed with 21 grandchildren and many, many great grandchildren.

Ernest was a longtime resident of Texas City, TX and a parishioner of Queen of Peace Catholic Church. He was also a member of the Guadalupana Society. He enjoyed his job and was proud to have been a truck driver for 25 years.  He and his wife enjoyed dancing and spending their weekends with family at BBQ gatherings and watching all grandchildren events.  He and his wife are proud to have started and operated a small business venture that continues to be successful. He was a giving and selfless person who took pride in making others happy and was respected by those who knew him.

Visitation will be Monday, January 8th, 2018 from 5- 8 p.m. with Reciting of the Rosary from 7-8 p.m. at Carnes Funeral Home in Texas City with a Funeral Mass on Tuesday, January 9th at 10:00 am at Queen of Peace Catholic Church in La Marque, TX with burial to follow at Mt. Olivet Cemetery in Dickinson, TX. A Celebration of Life will follow at the Parrish Center at Queen of Peace Catholic Church.