add a candle »
Dec 9, 2021 Praying for you guys strength. Thanks so much for allowing us to be part of her last day🙏💙
George & Ann Thompson
Dec 9, 2021 Keeping the family uplifted in prayer Monica Justice
add a note » 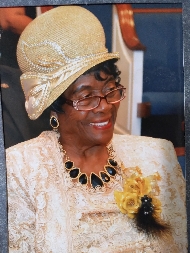 On January 1,1930, in mt Zion/Willis, Texas the 10th child born to the union of Owen Sr and Carrie Agnes Mitchell was named Elna Doris.  The Mitchell family was so proud of the newest member of their family, a beautiful bouncing baby girl. They called her “Molly”. The entire Mitchell family were devoted Christians. Doris accepted Christ and was baptized at the early age.

In Mt Zion /Willis, the Owen Mitchell family along with 2 brothers and 1 sister cultivated a thriving farm and was known as successful landowners. Owen and Carrie were always training their children to trust in the Lord, love one another, be productive, hard workers; the Mitchell family continued to enlarge their territory.  They were a very close family. Every 19th of June, Owen and Carrie loved to celebrate with lots of food and family. Owen would barbecue a whole pig. Carrie would make the trimmings and the entire Mitchell clan would have a grand Juneteenth. Carrie passed away at an early age, leaving Owen and the younger children.  All of the older siblings rallied to take care of Owen and the younger siblings. Doris graduated from school in Mt. Zion/Willis and followed her older brother O.A and some of her other siblings to Galveston to make a better life for themselves. Doris met and later married in 1950, the love of her life Matthew “Mac” McDaniel, and to this union five children were born, two boys and three girls. A set of twins gave Doris and the entire Mitchell family great joy. Doris became a member of the Galilee Baptist Church under the leadership of the late, Rev. H T Smith followed by the Rev.  B.J. Hunter. Doris and the entire McDaniel, family, were faithful members of the Galilee Baptist Church. Mac became a Deacon and she a Deaconess. Doris was also a member of the Senior Mission and worked in various auxiliaries throughout the church. Mac became a proud Mason and Doris joined the Heroines of Jericho Court Lakeview #262. The McDaniel family was well known throughout the Hitchcock community. Doris worked hard and became a X- Tech. She worked 30+ years and retired in 1982 from UTMB. Doris was always providing love and support to her children and all of her siblings and their families. She loved having family around. Doris became the matriarch and assumed the role of Mother/Aunt to her children and many nieces and nephews. Doris was always “dress to the Nines”. The smile on her face was genuine and an outpouring of love to all she met. On Thursday, December 3,2021 Doris McDaniel made her peaceful transition from this life and entered into eternity with God surrounded by her loved ones who had given her impeccable care always and throughout her illness; she was preceded in death by her beloved husband, Matthew Sr. her children Matthew Jr.and Gloria, Debra& Rose, her parents, Owen&Carrie, siblings O.A., Aliva, Ephraim,Sim Hampton, Emma, Herman, Rubben,  Ruth , Marie&James, many Aunts, Uncles ,Nieces, Nephews, and Cousins .

Doris will be missed by her children, nieces, nephews and all who knew her. Her family and friends all loved her, but God loved her best, and called her home to rest!

There will be a public visitation held on Thursday, December 9, 2021 at 9am with a chapel service to begin at 11am.  Services will be held at Carnes Funeral Home located at 3100 Gulf Freeway, Texas City, Texas 77591. Burial to follow at Hayes Grace Memorial Park.