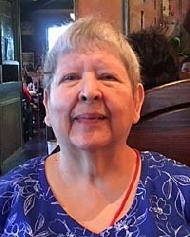 She worked for many years at Tenneco Oil and Gas as a key punch operator. There she met her best friend, Bernadette Weatherford. They remained friends for over 50 years. Dulie later worked in retail sales at JC Penney.

She was of Baptist faith and attended Northside Baptist Church. Dulie enjoyed cooking, traveling, and most of all spending time with family.

Dulie is preceded in death by her mother, Mary Grace Sandino; father, Alfonso Sandino, and nephew, James Bremermann as well as many aunts and uncles.