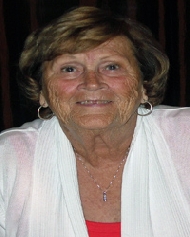 Jean was born to William Guy and Myrtle Lucille Taylor Spradley on August 3, 1935 in East Texas in an area of the piney woods known as Deadwood.  She passed away on November 20, 2019 surrounded by her loving family at her daughter’s home in Santa Fe, TX and now resides with her Heavenly Father. She was preceded in death by her parents and a son. Her legacy includes her loving daughters & sons-in-law Sharon & Clifford Hicks, Sandy & Rodney Roberson; loving grandsons & their wives Chris & Holly Hicks, Jay & Erika Roberson , Travis & Cari Hicks; great-grandchildren Isaac, Raelyn, & Tiffany Roberson & Hudson Hicks; devoted sisters-in-laws Donna Rodgers and Cheryl Evans. She was known by many names---Jean, Honey, Mom, Mother, Grandma, and Grandma Jean. But no matter what she was called, she was loved by all.

She was born in her maternal grandparents’ home and spent her young years on the family farm.  Her parents moved to Shreveport, LA and she graduated from Byrd High School in 1953. She attended a Business School after graduation and started working as a legal secretary. She met the love of her life Walter Travis Rodgers in the summer of 1954. They dated a few months before marrying on December 4th 1954 and celebrated 58 years of life together prior to his passing.

The young couple moved to Pasadena in 1957 with 2 babies, Sharon & Sandy. Jean was a mostly a stay at home mom but worked in various jobs such as doctors office receptionist, apartment complex manager, and the tax office of the Pasadena Independent School District. In 1978, she started working full time at Gulf Coast Educators Federal Credit Union as a loan officer.  By the time of her retirement in 1996, she had advanced to the Vice President position of the League City branch office.

Even though she had a career outside the home, her real career/priority was family. As the matriarch, she made sure Walt, Sharon & Sandy had everything they needed. There was never a dull moment in their home. The house was always full of Sharon & Sandy’s friends. She was the “other mother” to many kids in our neighborhood. She made sure simple days, as well as holidays were special events. She was always ready for an adventure.

After retirement, she and Walt enjoyed traveling, making the trip of a lifetime to Europe. But her favorite place to be was the beach, especially beaches in Mexico. They made numerous trips to Mexico through the years. Walking the beach and combing for shells was a passion, whether it was hot, cold or raining. Walt bought her a bay house in Galveston which brought so much joy to the entire family.  She used to say “there must have been an old sea captain in my past”.  She was always ready for a spontaneous adventure.

After Walt passed away in 2013, she moved in with Sharon & Cliff for about 3 years.  At 82, she decided she needed one more adventure; she wanted to live by herself.  Even though she was legally blind, she moved into Heartis Retirement Apartments and lived there for 2 years prior to her health failing. She loved her apartment and the new friends she made while there and it’s all due to her inner strength and independent spirit.

We want to thank our family & friends for their love, prayers, and support during this difficult time. We would also like to thank Encompass Hospice for the compassionate care of Mom.

Pallbearers will be Cliff, Chris, and Travis Hicks and Rodney, Jay and Isaac Roberson.