add a candle »
Oct 12, 2018 He loved to BBQ for us at our get togethers. Such a special friend to us. Already miss him. Jeanie and Davied
Oct 12, 2018 Over the years our paths crossed many many times. from AA meetings, where he helped many people find sobriety to working with our children in the Ag program. Later in life we met yet again at St. George,s. It was a pleasure to know and volunteer with Don. He was a great man and a great cook! Sharon Willingham
add a note » 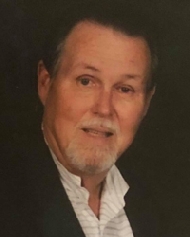 Donnie is survived by his brother, Lloyd W. Criss, Jr and wife Diane, son Brian Criss and wife Shanna, daughter Katie Collins and husband Alan, ex-wife and friend Linda Criss, grandchildren Jake, McKinsey, Brooke, Jessica, Ashley, and Mark (and wife Kristen), four great-grandchildren and one on the way.  Also left to cherish his memory are his niece, Susan Criss, and nephews Lloyd W Criss III and Ted Criss.  He loved his family deeply and steadily. Donnie was always ready to offer a listening ear or a helping hand.

He grew up in Galveston and Texas City and graduated from Texas City High School, class of 1961.  He was a Christian man with a strong faith.  He was a member of St. George’s Episcopal Church for over 63 years and served as an acolyte in his youth.  His acolyte cross, which was bestowed upon him in 1957, was a comfort to him in the last several years and he wore it every day as a testament to his faith in God.

Donnie served his country in Vietnam as a Navy Seabee (MCB-58) in 1969.  There he helped build hospitals and other support facilities for combat soldiers.  He earned a Bronze Medal, Campaign Medal, FMFC Medal and was an expert Sharpshooter.  After returning stateside, he lived in Rhode Island and developed many lifelong friendships with other Seabees.

Upon his return to Texas City, he served in many positions at the Plumbers and Pipefitters Union Local 200, then 211, and later at O.C.A.W while employed with Amoco.  He was passionate about organized labor and believed strongly that the union helped its members obtain the wages, benefits, and safety standards they deserved.

After retiring from (Amoco) BP Texas City, Donnie served from 2002-2011 on the College of the Mainland Board of Trustees.  He was grateful to serve this institution and believed he was making a difference for current and future families in Galveston County.

Donnie’s favorite Bible passage was from the book of St. Matthew 25:37-40.  “Then the righteous will answer him, ‘Lord, when did we see you hungry and feed you, or thirsty and give you something to drink?  When did we see you a stranger and invite you in, or needing clothes and clothe you?  When did we see you sick or in prison and go to visit you?’ “The King will reply, ‘Truly I tell you, whatever you did for one of the least of these brothers and sisters of mine, you did for me.’   He let the principles in these Bible verses guide his life to the best of his ability, and always sought to love, serve, and give what he had to others.  He ended every family prayer with “Let us be ever mindful of the needs of others,” and we will continue this tradition both in word and deed in his honor.