add a candle »
Nov 19, 2020 I will really miss Domingo Always harassing me I always want to dig in my pocket. I will miss his smiling face. Most of all I will miss seeing him with Geneva. Hello hugs and prayers go out to the family.
Annette Hawkins
Nov 19, 2020 Dear Bingo,
Mainland won\'t seem the same without you. You are a legend and you will be missed, you will be remembered and you are loved. So many miles of wire with your lasting imprint.
God Bless your precious family as they try to navigate life\'s journey without you.
Hay te watcho carnalito. Donna Alvarado Ortiz
add a note » 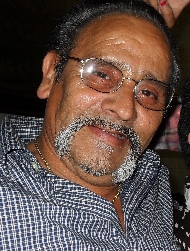 It is with great sadness that we announce the peaceful passing of our Dad, Domingo Alvarado Jr., 72 on November 14, 2020 in La Marque, Texas. He peacefully passed away surrounded by his loving Family.

Domingo was born in Donna, Texas on June 13, 1948 to the late Domingo Alvarado Sr. and Andrea Campos. Preceded in death by his 16 Siblings, Father-in-law Edward Quintero Sr. and Mother-in-law Juana Quintero and his Grandson Blake Sobnosky.

Early in life Domingo was a Merchant Marine, and he also worked at Bayside Compress. Later he worked for The Worthen Electric Company, where he found his passion as an Electrician. He then devoted the next 40 years at HCA Healthcare Houston Mainland as their only Electrician. He was well respected as a great leader and trained several of his peers at the hospital in the Maintenance Department. Domingo was very well respected by the hospital staff at HCA and had many friends there.  Domingo received several accolades such as Employee of the month, Employee of the year, and the first ever Humanitarian Award in 2009.

Domingo loved and was dedicated to his family and dogs (Hector and Emily Ann). He was humble, kind, and he never met a stranger. He was a (corny) jokester/trickster. Domingo was an avid Houston Astros and Texans’ fan and looked forward to Sundays watching the football games with his daughter (Christina). Domingo enjoyed going the game rooms every day after work. He enjoyed coaching his son (Rob) t-ball and soccer team and his daughter (Christina) softball team. His pride and joy was spending time with his grand-daughter (Abby). They enjoyed going crabbing together and their breakfast on the weekends.

The Family would like to thank all the staff at HCA Houston Healthcare Mainland, Dr. Armstrong, Dr. Prince,  Dr. Cantu, Dr. Valla, Dr. Singh, Dr. Beverly Lewis, Dr. Dunn,  Dr. Lakhani, Dr. Pavuluri, Dr. Cline, Dr. Moinuddeen,  A*Med Hospice and the numerous nurses for the amazing care they provided. We found ourselves humbled by the outpouring of love, support, and prayers that we have received.

There will be a public visitation heldThursday, November 19, 2020 from 5pm to 7pm with a Rosary to begin at 630pm.  There will be a second visitation held on Friday, November 20, 2020 held at 9am until the chapel service begins at 11am.  Services will be held at Carnes Funeral Home located at 3100 Gulf Freeway, Texas City, Texas 77591. Burial to follow at Calvary Catholic Cemetery, Galveston, Texas

If you would like to send flowers, please send to Carnes Funeral Home in Texas City.