add a candle »
Jul 23, 2013 We will miss you a lot. Thanks for your laughs. Brendon Edwards
Jul 22, 2013 Garrett we will miss your smile and infectious laugh that always lit up a room. Love you Oscar & Sharian Taylor
add a note » 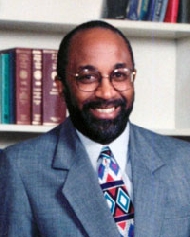 Deacon Garrett N. Harvey was born on June 02, 1952 in Houston, Texas to Rev L.V. and Carol Harvey. He attended school in Houston, Texas and graduated from High school in Brenham, Texas class of 1970 and he later attended Blinn College and Sam Houston State University majoring in Criminology.

Garrett gave his life to Christ at an early age at St. Peter’s Baptist Church under the leadership of his father Rev. L.V.Harvey. His greatest joy came later after he          rededicated his life to Christ and united with Greater Mount Calvary Baptist Church under the leadership of Pastor Timothy Allen. Garrett was a very faithful, loyal,    dedicated, patient and trusted servant. He loved God, his family, his Pastor and First lady and his church family. He had a gentle and humble spirit, a kind heart and      always wore a smile. He never met a stranger. Garrett was very active at Greater  Mount Calvary; he served as a Sunday School Teacher, sang with the male chorus and served where ever he was needed in the church and served in the community doing various Health Fairs. He touched a lot of lives and taught us all how to live. He worked tirelessly with the American Heart Association on the African American Task Force, Jump Rope and Hoops for Heart while waiting for a Heart Transplant. On August 07, 2010 Garrett received a “new” transplanted heart; he was # 175 at UTMB. He was so grateful for this blessing. Then on Sunday November 11, 2012 Garrett was ordained as a “Deacon” by Pastor Allen. He was overjoyed to serve in this position. Garrett “fought a good fight and has finished his course”. To God we give all the Glory for the life and legacy of Deacon Garrett N. Harvey.