add a candle »
Sep 23, 2017 My sympathies to the family; it is not easy when someone we love dies. The pain and grief can seem unbearable. May it comfort you to know that God promises that the dead will live again.
(Isaiah 26:19). Please feel free to visit our website www.jw.org for more information on this topic. Bobbi
add a note » 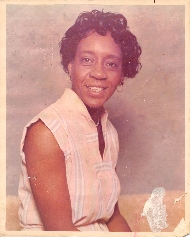 On August 14, 1944 in Jasper, TX, a baby girl was blessed to the union of Mr. and Mrs. Johnson.  They named her Cora Lee.  She was a graduate of Jasper High School in Jasper, TX.

Casey and Cora were united in marriage 30 years ago and she was previously employed by NASA and private nursing.

Cora was preceded in death by her parents and her brother, Wilmer Johnson.