add a candle »
Dec 23, 2017 Linda, Gingie and I were so saddened to hear of Ray\'s passing. Although we hardly knew him, our time spent together was very special. You are in our prayers and here\'s hoping that you find God\'s peace. Gingie and Terry Glover
Dec 22, 2017 I enjoyed meeting and talking to Ray at Linda\'s class reunion. It was clear that he loved life, had a wry sense of humor, and loved his wife. My condolences to Linda and his entire family. May you find comfort in the sweet memories of Ray that you all share. Bunny Creasman
add a note » 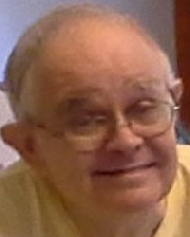 It is with great sorrow that I report that my loving husband of 34 years died on December 14th after a very long battle with COPD and Congestive Heart Failure.  In August we relocated to Chris & Lisa’s house after ours was destroyed by Hurricane Harvey.  Shortly after the move, Ray had a mild stroke and began having major difficulty with retaining water.  This problem got worse and worse over the next few months.  Finally, his heart gave out.  He died in my arms and it was peaceful.

Ray was born in Cleveland Ohio in 1942.  He was the oldest of six children born to Carl Ray and Rosalie Laughinghouse.  His youngest brother Charles Randy passed away ten years ago.  He is survived by his twin sisters, Ione Laughinghouse Parry and Trudy Laughinghouse Coomer, and his brothers Cal and Clay Laughinghouse.

Ray has one son, Charles (Chris) Laughinghouse.  Chris and his wife Lisa have one daughter, Juliana who is two years old.

After four years in the Air Force, Ray worked as an air traffic controller with positions in Dallas and Little Rock.  After a PATCO break, he finished his air traffic career in Palmdale, CA, Molokai, HI, and Wheeler Army Air base in Mililani, HI.

After retirement, he and I retired to Texas.  Although health issues limited his activities, his sense of humor and love of a good story persisted.  He loved reminiscing with friends and family.  He spent hours on line and loved funny stories about German Shepherds. His two dogs, Gretchen and Elsa were at his side as he died.  They are very lost without him and continue to wait for him to return.  For the last few years, his outlet was Facebook.  He visited with friends and family and posted all sorts of funny material.

Ray donated his body to the UT Medical School so there will be no service.  I am flying to Ohio next week to visit with his siblings and pay our respects.

He will be sorely missed.  I had just bought a house and was to move him to it the day after he died.  He never got to see it.  He will always be my one and only love.