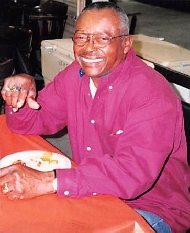 On November 6, 1935, a beautiful baby boy was born to Carlton and Mary Jones.  They named him Clifton Jones.  He was the third of four children, after losing both of his parents Clifton was reared by his grandmother.  Ms. Clementine Gallien in Prairie Ronde, Louisiana.  They later moved to Opelousas, Louisiana. Clifton was Christened at a very young age.  He attended the St. Landry Public School system.

In 1958 he married former wife Teresa Lewis, in this union they were blessed with four children.  He later moved to Galveston County, Texas and made this his home.  On March 12, 1992 he married Helen Marie Nunn.  Clifton was employed by Anheuser-Busch-Budweiser, for 32 year he retired in March 2000.  He had a great love, for riding his motorcycle, boating, fishing and playing pool.