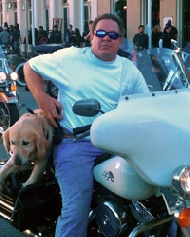 Chris Bernard Norregaard, much loved and adored husband, father, son and friend to many more people than can be counted, passed away Saturday, Feb. 26, 2011, in Galveston after a motorcycle accident that took him away from all of us way too soon.

Chris was a B.O.I who grew up on the island, never leaving for long, and calling the West End of the Island home. Chris was a master carpenter who owned a construction company and built many homes, boat houses and piers and various other construction projects on the west end. He was also a skilled metal artist and dedicated member of the Jamaica Beach Volunteer Fire Department for 25 years. Chris loved being part of the community and assisted with many calls during his time with JBVFD. Chris worked tirelessly during the after-math of hurricane IKE, assisting wherever and whenever he was needed. He loved riding his motorcycle, playing with his dogs, creating his artwork, helping friends and spending time with his two boys and his wife. He had monstrous hands and a heart of gold, always letting you know, "I LOVE YOU, MAN!" Our lives and the Island won't be the same without him, but what an honor to know him and love him while he was here!!

Following the services on Friday, the family wishes to invite all friends to a “Throw Down” for Chris at Rusty and Monica’s house, 13423 Stewart Road in Galveston.