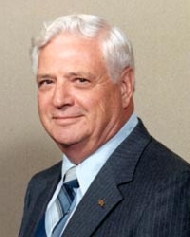 Charles V. Rath, Sr., 91, of Texas City, TX went to be with his Lord and Savior Jesus Christ on Tuesday, March 1, 2011 after a prolonged illness. He was born April 13, 1919 in Atlantic, PA to the Rev. Virgil O. Rath and Barbara Ellen Hall.  He married Alva Lorraine Borowsky and they had three children.

Charles served honorably during WWII from 1944-1946 in the infantry and then as a clerk/stenographer for General Ogden in the USA, the Philippines and Japan.  After the war he worked for 28 years as a clerk at the Nickel Plate/Norfolk & Western Railroad in Conneaut, Ohio and then worked for 17 additional years for the Babcock & Wilcox Naval Nuclear Fuel Division in Lynchburg, VA as a purchasing agent.  During his retirement years he resided in TN, FL and TX.  He enjoyed gardening, woodworking, traveling and spending time with his family.