add a candle »
Nov 30, 2017 Dear Sullivan Family, please accept my sincere condolences for your recent loss .Jehovah God has promised us that those who are dead in the grave will return to live on the earth forever, there is going to be a resurrection. /Acts 24:15 Marlowe
Nov 25, 2017 May the God of everlasting comfort be with your family during this time of loss. I too have lost family due to illness. Please know that God longs to reunite us with our loved ones in a world where sickness, pain and death will be no more. (Isa. 33:24; Rev. 21:4) My deepest sympathy. Kim Bailey
add a note » 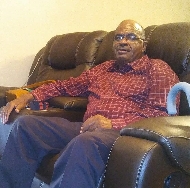 Charles was born August 27, 1956 in Galveston, Texas.  He was the fifth of nine children born to Louis and Mercy Barron Sullivan.  He grew up in LaMarque, Texas receiving his education within the LaMarque Public School System, graduating with the LaMarque High Class of 1975.

He accepted Christ as his Savior at an early age and was baptized and became a member of Progressive Baptist Church in Texas City, Texas under the late Rev McWashington.

Duke was very fond of horses and loved riding and attending rodeos and trail rides. He worked as a Heavy Equipment Operator for PCI, Brown & Root, and Altair Strickland. Duke was a member of the Triple B Riding Club.

He was dedicated to his family and was the proud father of his daughter, Courtnea.

May 13, 2007, Duke joined Jesus is Lord Church under the leadership of the late Pastor Virginia Wright where he served in the Brotherhood and on the Intercessory Prayer Team. He remained faithful until the decline of his health.

There will be a public visitation held on Saturday, November 25, 2017 at 9am with a chapel service starting promptly at 11am and burial to follow at Mainland Cemetery in Hitchcock, Texas.