add a candle »
Apr 20, 2017 Dear Caldwell family, please accept my condolence. To learn about God’s promise to rid the earth of sickness, death and to resurrect our loved ones who have died back to a Paradise earth, go to: tinyurl.com/JYP4YL4. My deepest sympathy to you all. A CarT
add a note » 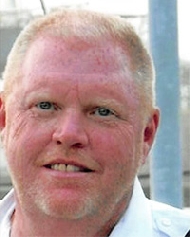 Michael was born in South Charleston, West Virginia on July 23, 1960.  He passed away on Monday, April 10, 2017 peacefully at his home in Santa Fe, Texas at the age of 56, surrounded by friends and family.

After spending much of his youth in Hurricane, West Virginia, Michael poured much of his energy into the printing industry.  He won 1st place in State and placed 3rd in the Nation in a graphics    design competition.  He loved being his own boss and quickly       established Caldwell Printing in 1992.

Michael's natural sense of adventure came calling and he moved to Belize in 2000 where he briefly managed a successful nightclub for a few years.  He had a love of dancing, roller skating, D.J.ing and entertaining in general.

Never one to pass up on an opportunity to travel, Michael picked up and moved to Thailand in 2003 and took a position teaching    English for the next couple of years. Destiny intervened and it was in Thailand that Michael met and fell in love with Uthai. In 2005, he traveled back to the U.S. and settled in Galveston.  Uthai soon joined Captain Michael in 2008 and together they established the now   thriving Baywatch Dolphin Tours.

He is preceded in death by his parents, James and Dolores Caldwell.

Michael is survived by his beloved wife of 14 years, Uthai,  daughters, Callen Caldwell of Webster and Patricia and husband Soren Frost of Amarillo, TX; brothers, James Caldwell of Raleigh Durham, NC and Daniel Caldwell and wife Kimberly of League City, TX; sister, Debra Searls of Tornado, West VA.; four grandchildren, and a great-grandchild as well as and many nieces and nephews.

Captain Michael always seemed the happiest with his steadfast Bacardi Rum & Coke in one hand and Uthai by his side.  Michael lived life to the fullest, had a quick sometimes biting wit, and was known to speak his mind.  Uthai, Patricia, Callen and his many friends, customers of Baywatch Dolphin Tours and family will miss the energy, light, passion and humor that Michael brought into this world and now look forward to a time when we will all meet again