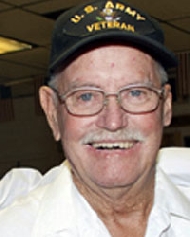 Buddy was born June 18, 1933, in Cleveland, to William and Alice Franklin. He later left Cleveland, and joined the Army at age 17, and later settled in Houston.

On May 25, 1967, Buddy married the love of his life, Joann. Together, they raised 10 children. They had a love and marriage that most only dream of having. Buddy was a loving Husband, Father, Pawpaw, Brother, Uncle, Father-in-law, Brother-in-law, and Friend. He would do anything for anyone, and never thought twice about doing it. He had a smile and laugh that filled up a room. He was very active and lived life to the fullest, even to the very end. He loved telling stories of his days in the army, when he was stationed in Germany, and was part of the 82nd Airborne. Even after leaving the army, he continued jumping and made over 400 parachute jumps. Other than spending time with his family and friends, his greatest love was fishing. If the weather permitted, you could find him out on the lake with his hook in the water.