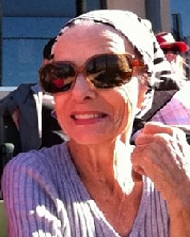 Brigitte Uptegrove, 64, of League City, Texas entered into eternal rest on Wednesday, February 19, 2014 at home in the presence of family and friends.

Brigitte was born in Schwabach, Germany on June 20, 1949 to Gunter Friedrich and Elisabeth Hauck.  She spent her early years in Germany until she met her husband Timothy Uptegrove while he was stationed in Germany in the United States Army.  They married on October 5, 1972 and from the beginning of that union, Timothy took on the role as father to Robert Ronald Kirsch and Thomas Andreas Kirsch.  They moved to League City, Texas in 1974 after Timothy’s discharge from the Army.  They had two additional children—Rusty Lee Uptegrove and Christina (Tina) Elisabeth Uptegrove.

Brigitte was a loving wife, mother, grandmother (Oma), sister, aunt, and friend. She was very selfless and always put everyone else before herself.   As a stay at home mother she spent her time volunteering at school, running kids to sports, taking care of her husband and much more. All who knew Brigitte knew exactly where she stood—no filter. Sometimes that was a good thing, sometimes a bad thing, but at least you knew where she stood! As her kids got married and she became a grandmother she took that role to heart.

Brigitte devoted her time to studying scripture in weekly Bible studies and living out the Word of God. She was actively involved in serving at Texas Avenue Baptist church through VBS, Food Pantry, Club, and anything else she could do behind the scenes.

Brigitte Uptegrove is preceded in death by her mother Elisabeth Hauck-Shennach and younger sister, Irmgard Shennach. She is survived by her husband of 41 years Timothy Uptegrove, her four children: Robert Kirsch of Dickinson, Texas; Thomas and wife Lee Kirsch of Alvin, Texas; Rusty and wife Stacey Uptegrove of Santa Fe, Texas; and Tina Uptegrove of League City, Texas. She has 4 grandchildren, whom called her Oma: Autumn Nicole Kirsch, Alexandra Denise Kirsch, Alyssa Anne Kirsch, and Justin Thomas Kirsch. Brigitte is also survived by two siblings, Christa Kirsch and Gerhard Kirsch of Schwabach, Germany; along with numerous nieces, nephews and their families.

Brigitte fought the good fight, finished the race, and kept the faith!