add a candle »
Jan 24, 2014 I used to be a member of the church and Bernice was always very kind to me. She will be missed. Paula Stephens
Jan 22, 2014 Bernice Bailey was a true woman of Grace and a wonderful living example of love and service to others. I was truly blessed to be her daughter-in-law, but even more so having her as the grandmother to my children. She was loved dearly and will be missed immensely. Hope Bailey
add a note » 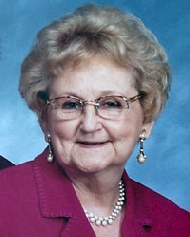 Bernice Francis Royer was born on October 12, 1929 in DeQuincy, Louisiana to parents Edgar and Versie Royer. After 84 wonderful years, Bernice passed away on January 17, 2014. She grew up in DeQuincy with her younger brother, Bud Royer, and graduated from DeQuincy High School. Following high school, Bernice attended Baptist Bible College in Springfield, Missouri in pursuit of a degree in Business Administration. Shortly after college, she began working as a secretary for Freeway Baptist Church in Houston, Texas.

On October 18, 1957, Bernice married Alton D. Bailey. Their son, Mark Alton Bailey, was born four years later. Bernice began working for the Detering Company as a bookkeeper, where she was employed for 29 years.

Bernice taught Sunday school for over 25 years and was a charter member of the Fellowship Church of Clear Lake.  She was a longtime resident of Houston, Texas where she raised her family and made many lifetime friends. Bernice was very well known for her cooking, specifically her Banana Pudding and Chicken & Dumplings. She was known for her faithful attendance to both church and Foley’s Red Apple Sales. The only thing she loved more than cooking for friends and family was searching through clearance racks and spending her husband’s money.

She was a devoted and loving wife, mother, grandmother, and friend.  She was truly a remarkable woman who always went above and beyond for others. There are no words to describe how greatly she will be missed.