add a candle »
Nov 27, 2020 Condolences to the Henderson Family. Diane Merchant
Nov 19, 2020 My condolences and prayers to Patrick & the Henderson family. May God continue to blessed you all with his grace.
🙏🙏 Fred Averette
add a note » 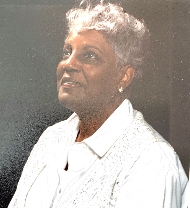 Barbara Jean Henderson went home to be with the Lord on November 12, 2020. Barbara was born in Galveston, Texas on April 1st, 1939 to Elijah Wilson and Louise Frank. She was preceded in death by her 3 siblings, Joe Frank, Geneva Lee (Christopher) and Irene Ford (Neal).

Barbara worked for many years and retired from UTMB-Galveston. Barbara was a faithful member of Hope Baptist church where she was affectionately known as “Diva Henderson”. Barbara heavily was involved with several ministries including the women’s ministry. One of her proudest and most memorable accomplishments later in life was becoming a certified Massage Therapist. Barbara worked passionately and enjoyed helping heal others through massages. She also volunteered to provide massages to breast cancer survivors.