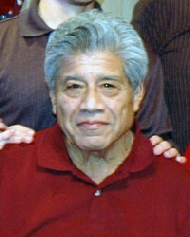 Arnold was a very blessed man and had a myriad of accomplishments attached to him during his lifetime, with a quick wit and friendly smile, he was always willing to help or lend a hand where needed.  He was a graduate of Ball High School in 1958 and loved serving his community.  Arnold ran the Junior League of Latin American Citizens ( Jr LULAC's) in the early seventies where he touched many young teenage lives helping to raise money for scholarships to support our Communities Youth.  Arnold also found time to serve as a Sunday morning Spanish Radio program host for KUFO radio station. The program was known as “Para Mi Gente” and had a very large following. Mr. Moreno booked many of Tejano's biggest named groups to entertain the community of Galveston.  These groups include Little Joe y la Familia, Sonny and the Sunliners, Elsa Garcia, Selena Quintanilla and many more.  Arnold also served as treasurer of Lulac Council #4436 and stood as a representative for what is right for many local causes and in some cases helped bridge the gaps between City Leaders and its public service employees.  Arnold was inducted in the LULAC Hall of Fame in 1993 for his outstanding community efforts.