add a candle »
Dec 6, 2015 He was a great man and he raised one of the kindest and caring person I have ever known, Elaine. You and your family and friends are in my thoughts and prayers. Tyra Jones
Dec 6, 2015 Special, very special man and his wife were extraordinary. Such love they showed to everyone. Up there with our Lord and Savior. Their rewards in heaven are many. Praying for the family til they meet again. Katt Lomison
add a note » 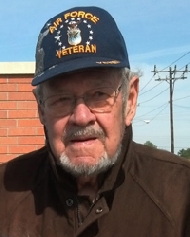 Ardy E. Blakley, Jr. was born May 15, 1931 in Lott, Tx and has been a resident of Texas City since 1951, where he married the love of his life, Barbara Froeschl, with whom he spent the next 64 years. He fondly became known around Texas City as “the bread man”, making bread and delivering it to shut ins or just anyone he thought needed a little extra love and kindness. He faithfully visited the sick and ministered to those in the hospital daily. He had so much love to give. He was a long time member of First Baptist Church, TC.

Awaiting his arrival in the Kingdom of our Lord were his wife, Barbara, along with his father, Ardy E. Blakley, Sr., mother, Bessie Lee Beckworth Blakley, sisters Wanda Fischer and Lurlene LaGrone. Walking with them on those streets paved in Gold are his son, Ardy E. Blakley, III (and his wife, Rebecca) and his daughter, Barbara Jean Hollingsworth

The family would like to thank all the staff at Mainland Primary Care Physicians for loving him as they did, Dr's Fan Li, Dorothy Merritt and Sid Acharya as well as everyone at Mainland Medical Center...from ICU to Food Services to Housekeeping. He will be missed by so many.

In lieu of normal remembrances, friends and family who wish may make memorial gifts to:

The Gideon’s Mainland Campus or Funds for Ardy E. Blakley, Jr. in care of First Baptist Church to help with final expenses.