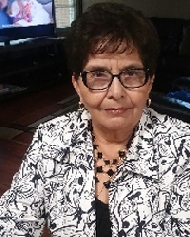 Antonia spent most of her life in the United States when she and her children arrived in 1981, working at UTMB until her retirement in 2000. She loved going out to eat, antiquing, watching novelas, listening to Vicente Fernandez and spending time with her family.

Her wishes were to be cremated.

Services will be from 5 to 7pm; Saturday, June the 13th. Rosary will commence at 7pm.