add a candle »
Sep 17, 2013 We met him severaltimes at Viva Las Vegas and RonnyWeider's. He was always patient to talk to everyone, even those he hardly knew. Our memory is kept alive by a large photo of tall Alvis hugging my Brenda Lee-sized wife Ingrid.
We'll mis you!!! Helmut Pieske
Aug 26, 2013 An honour to meet you and see you play. Have a beer for me. Steve
add a note » 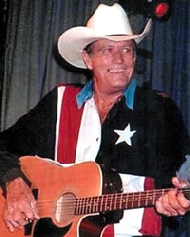 Alvis Wayne Samford was born in Paducah, Texas on December 31, 1937.  He passed away July 31, 2013 at the age of 75 at his home in Bacliff, Texas.  He is preceded in death by his parents Alva and Nona Mae Samford, brother J.W. Samford, sister Barbara Samford Shadle and son Daryn Holland.

Alvis served in the United States Air Force building communication towers in Florida, Puerto Rico, Goose Bay Labrador, and Iceland. After being discharged from the AF, he worked many jobs including Car Sales, Braniff International and many different construction crafts from carpenter to Superintendent. Although he worked at many professions, his first love was music.

He was a long-time member of Bayshore Fraternal Order of Eagles where he held the office of Trustee, President and Treasurer.  He was devoted to the FOE and was a constant volunteer until his health declined but still did what he could. He was a Mason and a member of the Rockabilly Hall of Fame.

Alvis Wayne’s first love was music.  He worked on his aunt’s and uncle’s farm pulling corn to earn the money to buy his first guitar. He was 10 years old. He learned to play rhythm guitar and later drums and bass.  While in High School he joined a band and went on the road, dropping out of school. He soon was offered a contract with Westport Records where he recorded 5 songs.  “Don’t Mean Maybe Baby” was a hit in South Texas where it held the number one spot for six weeks knocking off a certain Mr. Presley.  He later toured south Texas working five shows with Elvis.  He worked package shows from the Louisiana Hayride with Bob Luman, Johnny Horton, and Slim Whitman.

In 1960 he found out he was about to be drafted and joined the Air Force.  While stationed in Macon, Georgia he won a talent contest and was offered a contract with Capitol Records.  Unfortunately the Air Force would not let him sign it and after he was discharged no one seemed interested in his music.  He played country music over the next several years and cut a few more records but could never get the momentum he had in the 50’s with Rockabilly music.

Over the next few years he devoted himself to raising a family. He was a devoted husband, Dad, and Paw-paw. He always had a band on the side to fulfill his need to entertain.

In 1999 he received a call from a producer in England. He was asked if he would be interested in playing a show in England. He said yes and went on to perform shows in England, Sweden, Germany and Finland.  Here in the states he performed at Viva Las Vegas Rockabilly Weekender, New Orleans, and Green Bay, Wisconsin. At long last he found the recognition that he deserved playing and entertaining to packed houses with adoring and enthusiastic fans.  He is and always be a Rockabilly legend.

At news of his illness emails came from all over the world brightening his last few days.  I am sure wherever he is, he is entertaining everyone and having a rocking good time.

The Memorial Service for Alvis Wayne will be celebrated at Carnes Funeral Home of Texas City, August 10, 2013 at 1:00PM following two hours of visitation.