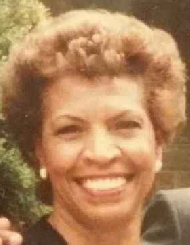 Alrethia Dotson, 77, passed away peacefully on April 13, 2016 at her residence surrounded by her loved ones in La Marque, Texas.

Alrethia will be remembered for her bright smile and contagious laughter. Her caring heart and energetic spirit caused her to never meet a stranger. She always made everyone feel comfortable and welcomed in her presence. Her refuge was gardening while talking with the Lord. She also enjoyed finding creative ways to make her home warm and inviting. Alrethia’s favorite time of the year was Thanksgiving where family and friends would gather at her home to fellowship and renew traditional values.

The viewing will be held on Saturday, April 16, 2016 at 9:00 AM with the funeral service starting immediately at 11am at Carnes Funeral Home, 3100 Gulf Freeway, Texas City, Texas 77591 with Interment at Galveston Memorial Park Cemetery, Hitchcock, Texas