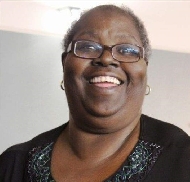 Charlotte Ann Veronica Kerlegon was born in St. Martinville, Louisiana to Gabriel and Rita Kerlegan November 8, 1950.  She was baptized at an early age at Holy Rosary Catholic Chruch where she received her first communion and confirmation.  She graduated from Ball High School in 1969 and attended Southwestern Business College where she received her Associate degree in Business.  After graduation, she started working at Uneeda Cleaners as a seamstress.

Charlotte’s favorite pastimes were reading books on her Kindle, playing Bingo, watching television, going out to dinner and hanging with her family and friends.  She had a giving heart donating monthly to various charities.

Charlotte was known all over Galveston County and was a mother to many.

There will be a public visitation held on Saturday, October 13, 2018 at 11am at Greater Barbour’s Chapel Baptist Church with a service to begin at 1pm and burial to follow at Forest Park East located in Webster, Texas.