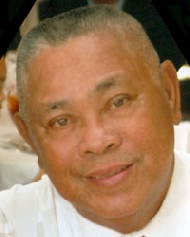 Agapito "Rodney" Ballerda Rodriguez, 77, of League City, Texas passed away on April 27, 2014.  He was born in San Miguel, Nabua, Camarines Sur in the Philippines on January 7, 1937.  He graduated and received his bachelors' from the Philippine Maritime Institute where he later was a Professor of Navigation.  Since arriving in the United States and making his home in Galveston, TX. Rodney retired as a civilian employee of the US Navy as merchant marine. He married Imelda Quintana on June 30, 1973.

He is preceded in death by parents, Marcelino and Maximiana Rodriguez; siblings, Julian, Vicente, Fermina, Estelita, Felix, Antonio and Niolo.

A special thanks to family and friends who prayed and comforted Rodney; Carnes Funeral Home and Mt. Olivet Catholic Cemetery.

Funeral Mass to be Celebrated at 11:00 a.m., Thursday at Shrine of the True Cross Catholic Church, 300 FM 517, Dickinson, TX with Rite of Committal to follow at Mt. Olivet Catholic Cemetery.