It was clearly by divine inspiration that this Christian name- Ruby was chosen for the 8th of 9 children born to Josephine Anongos and Emilio Dayasen (both now passed on to their heavenly home). It is meaning truly appropriately describes this special woman, sister, aunt and friend.

A Ruby is a gemstone and one of the most desirable gems due to its hardness, durability, luster, and rarity, with certain rubies being even rarer than diamonds. These descriptions so accurately portray the characteristics of our Ruby, that we can’t help but conclude this was a God given name.

Ruby hails from her ancestral village of Mountain Province in the Philippines where she was raised with her siblings. From humble beginnings, Ruby decided that with nursing as her passion she would pursue a career in nursing and completed training as a Registered nurse in her homeland. She assumed duties as a nurse at the Bontoc General Hospital in the Philippines briefly, before her adventurous nature led her to wanting a more varied experience as a RN. She then continued her nursing career, mainly in oncology nursing in Abu Dhabi, United Arab Emirates where she worked for several years.

The quest for even more adventure and a search for a place she could call home, led her to accepting an assignment with an international recruiting agency and was allocated to work at University of Texas Medical Branch in Galveston, Texas.

In June of 2012, her biggest adventure began in a new country, with new customs and a different culture. Her personality however, made this transition as smooth as could be expected. Ruby slid easily into her work role bringing years of varied experiences, and she received recognition such as GEM of the month. This is where

Ruby would, with her winning personality, garner a group of friends that became more like family, along with her many friends from her hometown. 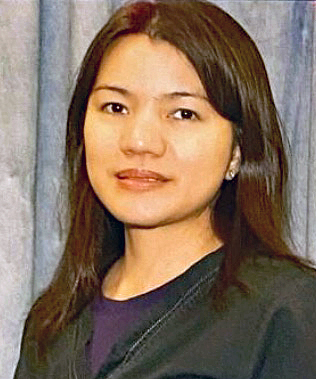 Ever the mellow, levelheaded one, she rolled with whatever tide or challenges that came her way and overcome any obstacle that presented itself. Don’t worry, because when the tide became too high, you can be sure Ruby would be off on a road trip, to just about anywhere with friends, or jet setting to amazing and new locations around the world with her sister, Helen and friends.

Ruby decided to make USA her permanent home and bought a home in Texas City, Texas which she took great pride in. Besides traveling the world, gardening was her favorite thing to do as she proclaimed, “it distresses me”.

She had a special place in her heart for dogs. Lulu was her heart as her temperament was so similar to her- chilled and laid back, while Ace was the playful boy that won her over with his eyes, and forced her to join him in play and enjoy the outdoors. smart, beautiful, humble, peaceful, gentle, soft spoken with the kindest spirit and the patience of Job from the Bible, Ruby was so easy to love, as just her presence calmed you. Our worlds were rocked and our hearts broken, as she unexpectedly made her transition to paradise to be with her parents, leaving us to use our sweet memories of her as our comfort. We hope your Mom, was your guide throughout heaven Ruby.

Death takes the body; God takes the soul. Our minds hold the memories, our hearts keep the love.

Our faith lets us know we will meet again.