add a candle »
Aug 7, 2018 The death of a child is one of the most painful losses a parent can experience. The Bible holds out a resurrection
hope for Caiden. For more info, type the following link into your tablet, computer or smart phone to learn more about the Bible\'s hope for our loved ones: tinyurl.com/jtxj7a7 Dawn
Aug 2, 2018 Cadien had such exciting things to talk about, I always admired and listened to him. He had a a great personality and was always thinking of stuff to come up with that he could make better. He was a strong young man. Fly with the angels little buddy you will never be forgotten
Lorrie LeBlanc
add a note » On July 29, 2018, our angel, Caiden received his wings and now flies with the Eagles among the Angels. After an almost yearlong battle with Very Severe Aplastic Anemia, surrounded by friends and family, Caiden was relieved of his pain and went to be with Our Lord and savior.

Caiden Jon Grosenheider was born in Texas City on July 22, 2005 to his parents Unique and Jon Grosenheider. He was born into a blended family with two older brothers Garion and Josh, 3 older sisters, Elaineanna, Kristin, and Cassidy with younger brother Grayson following almost six years later.

A builder from a young age, Caiden’s adventures varied from handmade Tonka roads to parts unknown to the largest of Lego builds. Caiden’s curiosity and love for adventure took him to places like Great Wolf Lodge in Texas, North Carolina, and Wisconsin to Ripley’s Believe It Or Not Museum in Hollywood, Ca. Caiden found sweetness at the Jelly Belly Factory in Fairfield Ca.  Cozumel brought silly antics in his prized oversized sombrero. His attendance at a Green Bay Packers game was as exciting to him as his adventures at the Lone Star motorcycle Rally.

Awe and wonder fed his yearning for travel and adventure no matter if he traveled by cruise ship, airplane, train, motorcycle, or passenger car.

His love and strength for Our Lord and Savior was witnessed by his participation at his church, Calvary Chapel Houston. He participated in Sunday school, VBS and Club 56 where he touched the lives of many and where his love for Christ was fed. Caiden proved to be a fine example of a Christ-like youth.

Caiden discovered the joys of scouting when he was 6 yrs old. Working through the ranks, his love of the outdoors grew through his badge work, community service and camps. His entrepreneurial skills erupted every year during popcorn sales. Convincing anyone that may have crossed his path that they NEEDED popcorn. His diligent efforts earned him a 1st class rank in the Boy Scouts of America, two of the ranks achieved while battling this fatal illness.

Caiden enjoyed close relationships with all who he is survived by. In addition to his parents and siblings, he is survived by Great Grandmother Erma Jean Holloway of Mauston WI, Great Grandfather Dar Davis of Apple Valley, CA. Grandma Momo-Noki Cindi Phillips of Apple Valley, CA, Grandmother Elaine Grosenheider of New Braunfels, TX, Grandparents Pat and Rhoda Phillips of Dickinson, TX, and  Kevin and Mary Grosenheider of Graysville, Alabama. Additionally, he leaves behind his Great Aunt Darla Marshall of Mesa, AZ and Great Uncle Chip Davis of San Antonio, TX. As well as, his Aunt Virginia Roden and cousins Garrett, Gillian and Lucy of Davis, CA.  Aunt Brandi and Uncle Mike Blunt and cousins Lauren, Jenny, and Jackie of Oakley, CA., Uncle (PJ) Patrick Phillips and cousins Riley and Haley  of Mesa, AZ.  In addition Caiden is also survived by many great aunts, great uncles, and second cousins.

Memorial celebration will be held Friday, August 3rd, 11:00 am at Calvary Chapel Houston. 3700 FM 528 Rd, Friendswood, TX 77546.  We would be honored for you to come and celebrate his life and passing with us. It is asked that if you are a Scout that you attend in uniform if possible. In lieu of flowers the family asks that you consider donating to the Go Fund Me account, https://www.gofundme.com/funeral-expenses-and-unpaid-medical.

But Jesus said, “Let the little children come to me and do not hinder them, for to such belongs the kingdom of heaven.” Matthew 19:14 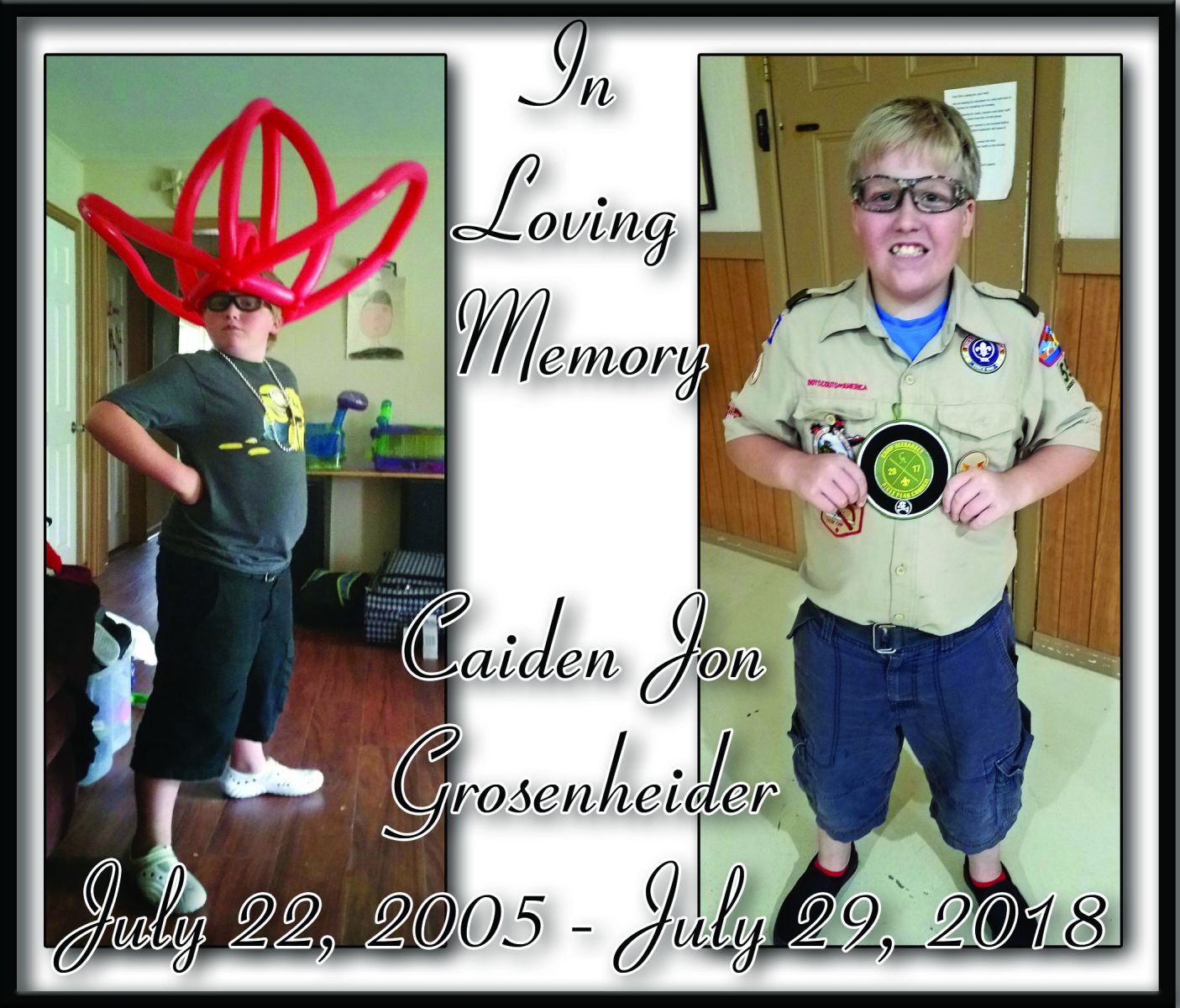